one Hook & Ladder Truck (out of commission).

removed from service in 1994 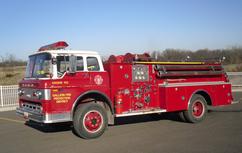 Fire Apparatus that served us in past years...

acquired from Dept. of Conservation July 2004

First Paid Fire Department in America
A large fire in Boston in 1679, led to the organization of the first paid fire department in North America, if not the world. Boston selectman imported a fire engine from England and employed a fire chief, Thomas Atkins, and 12 fire fighters to operate it.

First Automatic Sprinkler
The idea of automatic sprinkler protection dates back to about 1860. The first automatic sprinkler system patented in the United States was developed by Philip W. Pratt in 1872 in Abington, MA. From 1852 to 1885, perforated pipe systems were used extensively in textile mills throughout New England, and from 1874 to 1878 Henry S. Parmalee of New Haven, Connecticut, continued design improvements on his invention: the first practical automatic sprinkler head.

First Fire Alarm Telegraph
The fire alarm telegraph was invented by William F. Channing of Boston, MA, and Moses G. Farmer of Salem, MA, in 1847. After many attempts, Channing was successful in getting the city of Boston to agree to test the device. Channing, working with Farmer, tested the system, solved the problems, and installed the first municipal fire alarm system using a telegraph in Boston, MA, in 1852.

Since 1893 volunteer firefighters have courageously protected the town of Gallatin and rural areas surrounding it.

In 1893 after citizens of Gallatin expressed the need a volunteer fire company was formed. It consisted of 1 Chief and 10 members operating with 1 engine and 1 hook and ladder wagon. The need was evident due to many building fires in recent years in homes and businesses. Later formally named Gallatin Fire Department.

Prior to the volunteer fire company being organized, homeowners or anyone wanting to help utilized this equipment and the bucket brigades to assist the town and neighbors when a building fire occurred.

Since approximately 1893 the volunteer firemen were paid a small fee for fires attended. Throughout the years there has always been a roster of 10 to 20 firefighters. In the early 1970’s through 1995, firefighters received $10 per call and $5 for meetings/trainings attended. From 1995 through 2001, the amount went to $20 per call and $10 for meetings/trainings attended. In 2001, when the Fire District was incorporated all volunteer firefighters voted to cease per call pay and have funds go towards upgrading equipment.

The Gallatin Fire Department purchased its first motorized pumper truck in 1921. It was a 40hp combination motor fire truck with 950 ft. of 2 1/2" hose and 36 ft. of ground ladders.

Later they operated with a 1946 Ford Pumper truck. The Ford Triple Combination Fire Truck was purchased from Central Fire Truck Corp. St Louis, MO and was delivered December 5th, 1945. After a county wide fire district failed to organize, in the mid 1950’s, the Gallatin fire force received a 1957 Pumper truck from Towers Fire Apparatus on a 1956 Chevrolet chassis.

In 1972, a brand new “71” Ford Pumper fire truck was delivered from Boardman Fire Trucks. Other additions were received through the Missouri Department of Conservation, both being Army surplus vehicles. A 1967 MASH ambulance was converted into a personnel carrier and firefighting equipment was added. Nicknamed “Ironsides”, the vehicle can be used in conjunction with the Community Ambulance Service of Daviess County to provide stretcher aid. A 1956 GMC 6x6 Army vehicle had been fitted with two new aluminum 600 gallon tanks and other gear. So much labor was involved in upgrading the 6x6 that the truck has been nicknamed “Blood, Sweat, and Tears” then later renamed “Snoopy”. Gallatin’s firefighting equipment and force coupled with the city’s water service helped to maintain an insurance rating of eight (8) on the insurance industry’s scale of ten. That rating influenced premium costs for residential and commercial businesses within city limits.

In 2001, the Gallatin Fire Protection District was approved by voters, which included a 30 cent tax levy. After the district formed a goal was set to attempt to have the rating reduced for property owners and residents. A survey was requested from ISO to address this goal and finally it had been achieved in 2003. A rating of six (6) was assigned to the City and rural areas of the district were rated as nine (9). In 2015, we were reassigned to 6/6Y.

In Gallatin, there have only been four fire stations throughout history, soon we will have a fifth.

From 1893 to 1926, the first fire station was located in the back of city hall, under the water tower at South Main and Van Buren Street (alley side). A fire destroyed the city hall wood buildings in 1926. A temporary station was then located from 1926-1929 in the northeast corner of the Gallatin Ford Motor Co. at North Main and East Berry (formerly North Street).

In 1929, city hall moved to its current location at 112 E. Grand Street, in the old YMCA building. Fire trucks were housed in the backside with one bay door.

A new fire station project was launched in October 2014. In the past, buildings were adapted to be used to house fire apparatus. This is the first building to be constructed solely as a fire station. The new station, located at 207 S. Market Street has five apparatus bay doors on the west side and two on the north. Fire apparatus were officially moved and placed into service in November 2018.The first fire apparatus housed here are: Engine 101, Tanker 103, Brush 104, Brush 105, Rescue 107, Brush 108, and Ladder 109.

acquired 1996, retired/returned to Dept. of Conservation 2007

acquired from Dept. of Conservation March 2008

acquired 1996 from Dept. of Conservation

placed into service in 1997